The Case of the Maze and the Locked Security Gates

We were hired to serve a subpoena on a man who lived in a large apartment complex. Upon arrival there it was discovered that the building had more than usual security. The walk-in front entrance was a large pair of glass doors which were locked and which had an intercom system off to the side. Upon finding the apartment number the adjuster called but it was a completely different person to the witness. Undeterred, the adjuster found the buzzer for the on-site manager and pressed it. He asked if the manager knew what apartment the witness lived in and got the correct number. However, when he looked on the intercom again there was no listing under that number. He buzzed the manager again and asked if he could be given access to the building but the manager refused

The adjuster decided to wait until someone came to the door in order to gain access. However, after a half hour, there had been no foot traffic at all. The adjuster noted that there was a secure entrance to an underground garage to the complex and so he stood by it off to the side in some bushes. Before too long a car came to the gate, activated it and drove through. The adjuster waited until the car had disappeared inside the underground garage and just before the gate closed he ducked through the entrance. 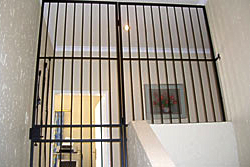 It turned out that this was only one out of four garages for the complex and that there were another 3 garages deep into the massive building. Working his way through various hallways and concrete labyrinths the adjuster came across a fire exit that was propped open. From here he was able to gain access to the apartments above the garage. When he checked the numbers on the apartment doors it was obvious that the address that the manager had given him was way deep into the complex and the very last section of units about a quarter mile from where he currently was.

Then the adjuster found that there were security doors that required a pin number in order to get from one section of the complex to the others. Not convinced that it was hopeless, the adjuster went back down to the parking garages and found a way to get to the very last garage under the units where the witness lived by again waiting for cars to pass through security gates. Upon finally reaching the witness’s units he made his way up into the units and located the correct apartment. No reply. He decided to check with the neighbors who informed him that they had seen the witness taking his clothes to the laundry room a few minutes earlier. The adjuster asked the neighbor how to get to the laundry room and set out to find the witness. However, upon reaching it, there was an “Out of order-room closed” sign posted. The adjuster stopped a passerby and asked if there were any other laundry rooms for this set of units.

This turned out to be on the other side of the complex on a lower floor. Upon arrival here the adjuster turned a corner just in time to see an elevator door which was next to the laundry room closing. He checked the room and it was empty but there was an empty laundry basket on top of one of the machines and somebody’s laundry was in progress. He quickly found the stairwell next to the elevator and ran up three flights of stairs to the floor where the witness’s apartment was located just in time to see a man turn a corner at the end of a long corridor. He sprinted after the man and caught him just as he was about to enter his apartment. Having identified the person as the witness he produced the subpoena and served him with it. Job completed.