The pleasant ambiance of a meal with friends at the Good Earth Restaurant was pierced by the sound of my pager going off.

I glanced at my watch. It was 7:33pm. With senses honed I got up from the table and made my way to the pay phone. My worst fears were realized in the short time it took me to contact the service and to be informed that there was a new assignment. They needed me on the scene NOW. On my way back to the table I looked outside at the windswept streets and pouring rain. “Why me?” was the thought that kept echoing through my head.

As I hurtled down the 210 freeway towards La Tuna Canyon Road, all I knew was that there had been an accident involving a waste management vehicle somewhere down in the canyon. As I approached the scene I saw a cluster of cars, hardly visible through the pouring rain. Police vehicles and ambulances were parked at odd angles blocking off the road. There were steep hills on either side. There were no street lamps. Visibility was abysmal. The rain was causing torrents of water to gush in waves across both lanes of the roadway. I was not prepared for what came next. As I pulled over to the side of the road, I put my emergency blinkers on and was met by the waste company’s supervisor. He pointed out a white BMW a few yards further up the canyon, and with poker face informed me that the driver was still inside and was deceased. A full-size waste company pickup truck was parked off to the side of the canyon a few feet further on from the BMW. Its left side from front to back was completely smashed in. Other remnants of vehicles were scattered about, all seriously damaged. 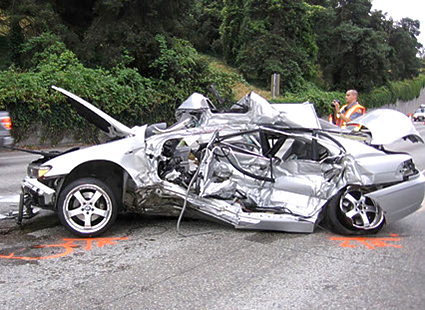 I began to take stock of the scene that lay before me, my mind compartmenting off the stress of the situation in order to allow a plan of action to spring forth which would mean the maximum benefit for my client in the shortest possible time, weighed against what the police and pouring rain would allow. I looked around for the people from the other cars. No dice. They were being interviewed by the cops. But, there was the waste company’s driver, sitting in the passenger seat of the supervisor’s truck. I made a beeline for him, pulled him out and into my car. Shaking the raindrops off and trying to keep them from falling onto my tape recorder and clipboard I began to unravel the facts of the human drama that lay before me. He didn’t know the BMW driver was dead and I wasn’t going to be the one to tell him. Slowly but steadily his version of the accident emerged. He was coming down La Tuna Canyon—doing no more than 40 — couldn’t see too well — rain driving against his windshield. Suddenly he hit a curve and the next instant he was skating — lost control — tried to brake but no good — and then — IMPACT. Not one, but two or three. Nothing could describe the sensation he felt of utter futility and helplessness as he hydroplaned out of control and his truck became the arbiter of his destiny for a few full and timeless seconds. Amazingly, he was not hurt. And, when his truck finally stopped there was a moment of peace, like he was floating somewhere in unending space. He just sat there, frightened and numb, unable to move, his mind incapable of fathoming the events that had just transpired.

After finishing with the driver it was time for me to brave the storm again and try and get some photographs. Sheltering my camera as best I could in the folds of my coat I slipped out into the driving rain. I began shooting the BMW from a distance as the cops wouldn’t let me near it until the corpse had been removed. I shot the other vehicles, the waste company truck, the road surface and the debris. Tow trucks were arriving. Their orange flashing lights mingled with the bright red glare from the flares that had been put down by the cops. It reminded me of a Christmas scene, but there was no joy here.

Methodically, the ambulance men removed the body from the BMW. It was a young male I was told, Middle Eastern. I stood a distance away from the car waiting for a signal from the cops. It came. I moved towards the BMW, flash at the ready. The driver’s seat still radiated the aura of sudden death. I leaned in. The left side was completely crushed. It was obvious that it had been broadsided by the truck, a much heavier vehicle. Then I saw the bloodstains on the back of the seat and on the frame inside just behind the driver’s window.

I finished with my photos knowing that most of them probably wouldn’t turn out due to the inky blackness of the canyon and the unrelenting downpour. The other people had all left the scene in passenger seats of tow trucks or with relatives. The police report face sheet would be made available tomorrow. I would catch up with them then. The cars had all been towed. There was nothing left for me to do here. Soaked to the skin and beginning to shiver, I coordinated with the waste company supervisor to meet at their offices at 8:00am the next morning. There would be a conference call with “corporate” and their attorneys to discuss strategy and damage control. I checked my camera and notes, wiping off the rain. Driving a little more carefully than usual, I made my way back up La Tuna Canyon, home to a hot shower and to prepare for what was to come, for I knew that what had transpired this evening was just a prelude and that the real beginning would be at 8:00am the next day.